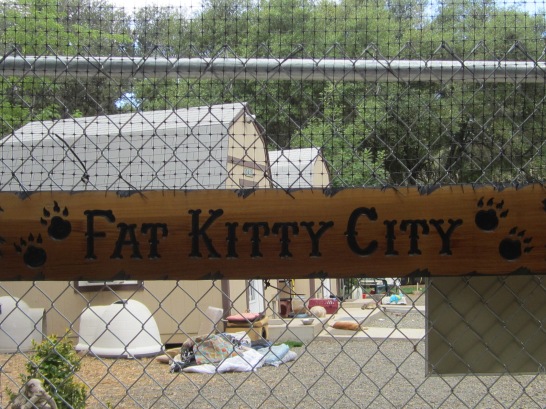 I visited an enchanting place today. It’s called Fat Kitty City and it’s the only cat sanctuary in all of Northern California. My family and I took our kitty Spud to the sanctuary to get neutered.

Spud looked a little worried, but I know he’s in good hands. We met Spud at the local pet store where Fat Kitty City brings cats for adoption.

Their sanctuary is magical, nestled in the hills, down a windy narrow lane, about two miles from the main road. Cats roam freely here inside a spacious gated property. There are about 180 cats, with approximately 25 feral cats who wander outside the gate. The feral cats, of course, know it is their home and probably would not survive anywhere else.

Ed and Cindy, a husband and wife team, live in a house adjacent to the property. Together, along with many volunteers, they care for the cats and kittens and provide medical services, food, shelter, and a place for these cats to call home. While many of the cats seemed happy and adjusted, I’m sure they would love to have a forever home. Some are permanent residents due to their physical needs and conditions. Ed and Cindy know all their cats by name, with the exception of eight of the feral cats.

Meet Winner. He pulled at my heartstrings. A woman phoned into the sanctuary one day to report about an abused, tortured cat. Someone had poured gasoline on him. When he arrived, his ear was hanging off and bloodied, and they thought he might lose his eye. He also had bloody cuts on his back. He was in such bad shape, the sanctuary could not yet release a photo of him on their website.

I met him three weeks after the sanctuary rescued him from his ordeal. I seriously bonded with him in a matter of minutes, petting his chin, followed by his purr and a throaty, cracking meow.  He was still recovering then, with a bloody ear and scabs on his back. With a lot of TLC and medical assistance, Winner pulled through. His progress was nothing short of a miracle. I find it amazing that Winner still trusts humans at all.

I considered adopting him, although I’m not sure how he would fare living with my two young boys. He seemed a little jittery around them. But, indeed, he is a Winner.

Kitties of all kinds

Ed likes to joke that they have all kinds, both the pretty and the ugly. Yes, some have nicked ears or are missing eyes or tails. Most cats here are older, but sometimes there are kittens.

The oldest cat living on the property is Bosco. He is over twenty years old, although they are not entirely certain. He eats just wet food now since he has no teeth.

Meet Ginger who was gloriously saved. She had only 15 minutes to live before she would have been put to death. The sanctuary came to her rescue when she was nine months old. I learned that the cats at shelters around here only have about two days to land a home. They give cats with special circumstances more time. Ginger is almost two years old.

When you arrive at the sanctuary, cats greet you slowly and warmly. You pet one, and then a few more. Within a few minutes, they surround you, following you around on the grounds. I understand that when they feed them at dusk, all the sleepy ones wake up, and more than one hundred cats are at your feet. That would be something to behold. I may have to return for that. You leave feeling as though you have made a few friends.

Please visit their website at fatkittycity.org for more information.