Inspired by true events. An account of four weary travelers on their journey from Southern to Northern California up the I-5 corridor and their stop at a diner somewhere along the Grapevine. 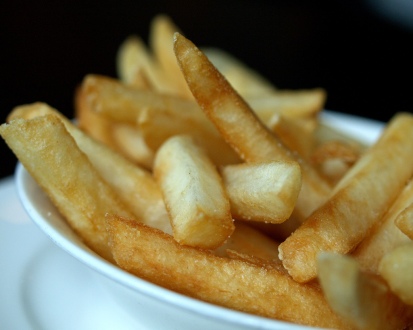 After several more attempts to successfully complete the I.Q. game, we declared ourselves idiots. This game is clearly meant to weaken your mind and it has no business being in a restaurant. It did not make the time pass faster. Quite the opposite.

The diner had lulled to a quiet ideal for napping. The waiters cleared the tables, ready for a surge of business. Paul, our former server, was nowhere in sight.

The white double doors of the kitchen flapped open and a new server appeared with what resembled our order. She made our way to our table carrying all four plates. She had tight red curls and glossy lipstick to match. Diamond earrings dangled and she flashed a mouthful of yellow teeth.

“It’s here. It’s here,” she announced to us as if we should be on the edge of seats in wonder.

“I have the hamburger,” Alex spoke up, famished.

“Okay. Sandwich #7, Ham and cheese melt.  A #3, and a pizza. Enjoy. If you need anything, my name is Jessica.” She placed the plates randomly on the table. At least she was capable of speech and was clearly making an effort. She paused and stood with her feet together, wobbling like a human bowling pin, her small head held by an ever-widening body. Without warning, she pranced off like a reindeer.

After we switched our plates of food, we surveyed that our special requests were ignored. It looked as if they made exactly what was offered on their menu with no deviation possible. My mom got onions, my sister garlic sauce, and my son mustard. My son decided he could live with it and scrapped most of the it off his bun.

I detected a thick, gluey substance in one of the holes on the top of my bread. One whiff and I knew it was mayonnaise. There was no possible way I could digest this sandwich without gagging.

Jessica glided into the center of the dining area and began what could only be described as interpretative dance to her own imaginary music. At one moment she was fluid, trying with all her might to showcase her dormant dance ability of a younger age, now brought to the surface by a deeper yearning aching to release itself. Moments of choppy, staccato arm thrusts in the air interrupted her languid motion, followed by erratic hand gestures in her co-workers’ faces. In one sudden swoop, she dropped to the floor, sliding her upper torso to the ground. Her hands splayed shimmering across the surface, her red curls hiding her face.

“Is she going to be all right?” a co-worker mumbled.

“Huh?” a co-worker responded, looking up from his daily paper. A slight nod to Jessica and then, “Oh, sure.”

In the midst of the commotion, I was able to stop one worker, an elderly woman set with hardened wrinkles and a steely gaze. Her head bobbled and she had only a few tiny spikes for teeth.

“This has mayonnaise on it,” I said to her.

“So?” she narrowed her eyes.

“Oh. This ain’t mayonnaise, honey. It’s swiss cheese. Haven’t you ever had swiss cheese before?” she scolded me like a child.

“Do you need me to put cheddar cheese on it?” she pounced.

“I just don’t want mayonnaise,” not backing down. They made a mistake, they should understand what it is. “Actually, nothing is right here.”

The old woman snapped her fingers. “Jessica. Your table is unhappy. Says nothing’s right,” she says with a southern drawl now.

Jessica lifts her head off the ground, “What?” Moments later, she stood breathy by our table to discuss the problem. They removed every plate except for my son’s hamburger.

He shared his fries with us. While their appearance looked promising, they were dry and tasted like cardboard.

“How could these be cold?” he said, dousing his plate with salt. We nodded, too tired to talk.

Greasy fast-food fries usually aren’t half bad when they’re hot. We stared wantonly at the MacDonald’s and Carl’s Jr. across the street.

Dear Reader: The story will conclude with Part 4. I hope you will join me. Thanks for reading.

photo credit: u m a m i via photo pin cc