I listened to a story last week on NPR and this was the main thrust of their story, that the Pope was exiting the building and not returning. But now…with the latest news, they really have something to talk about. Everyone is in a tizzy.

Apparently, the Pope is gay. Excuse me, I mean the Pope Emeritus is gay. He had been accused of being a homophobe as well. Of course, Benedict acting like a homophobe never precluded him from being gay. Actually, it makes perfect sense that he is, in fact, gay.

The substory is that the ex-Pope is not really leaving leaving. In fact, he will remain within the Holy walls of the Vatican at the former gardener’s house. This is unraveling saga here. Don’t quote me on that. Rumor has it, his Holilness will share staff with the pope next in line, or at least they will have the same handsome secretary. This undoubtedly will smooth any tension and facilitate communication.

Wait, strike that, that was before he came out. Now, he will be living in a small village in Italy called Castel Gandolfo.

Although this just in…a mild earthquake has struck Castel Gandolfo just days after the Pope’s arrival. Well, the village does rest on top of a volcano. What do they expect? Or, perhaps it’s sign from the Almighty himself.

I’m one of those ex-Catholics. The last time I went to mass, I’m certain the priest was staring me down when he mentioned “Christmas Christians” in his sermon. I didn’t return. I guess I have that in common with the Pope Emeritus.

But so what if the ex-Pope is gay? To be sure, the scandals shine a harsh light on the Vatican. Now the cardinals are gathering to elect a new pope, hopefully, in time for Palm Sunday. If only we could elect an American President so fast. I can only imagine these secretive meetings, where the first of order of business is to check for any wiretapping.

It would seem that many revered, respected, and most difficult of positions are only to be had in the final years of one’s life. The papacy being one of them. It’s too bad they can’t find someone young and energetic, someone in touch with the new generation of Catholic families, someone with an understanding of the 21st century and its challenges.

If you ask me, what the Vatican needs is a woman. I’m not saying this just because March is Women’s History Month. Enter “The Sisters Crusade,” a group of radical nuns who are practicing what they preach at homeless shelters, health clinics, and yes, arranged meetings with politicians that are typically canceled and rescheduled. Not surprisingly, their issues are political, tackling universal healthcare, reproductive rights, and immigration reform. Look, here they are in the November 2012 issue of Rolling Stone.

I know Bond is distracting, so I circled it for you. (You can read the article here.) 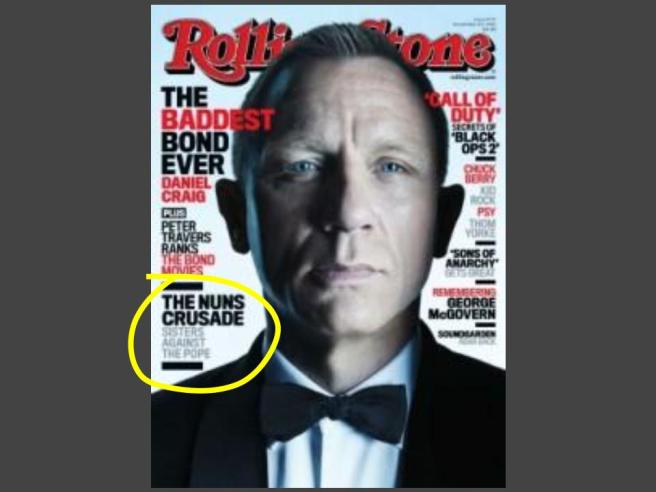 You read that correctly. Sisters Against the Pope. I’m proud to say that one of these Sisters is none other than my mom’s cousin. This means she’s my cousin, too, or uh…or a second cousin, or first cousin removed…no matter. She is Sister Margaret Farley, a former Yale Divinity School professor, and she’s got the Vatican in stitches, “making theological arguments in favor of homosexuality, remarriage after divorce, and female ‘self-pleasuring.'” (Rolling Stone, November 2012) You can imagine the waves she’s created.

The Vatican banned her book Just Love: A Framework for Christian Sexual Ethics. My parents, divorced, ex-Catholics, both have signed copies. Cousin Sister Margo always has a spot at my dinner table.

I doubt that a woman will ever be made pope in my lifetime, or if ever, but at least these nuns are talking, and they have an audience who is listening. It’s about time. Now, if only the Vatican will listen.

69 thoughts on “The Pope Has Left the Building”