I’ve missed you so! I’m back from my blogging vacay, at least temporarily. I wanted to at least check in with you.

As you may or may not know, I attempted to unplug from all digital electronic devices. Was I successful? The truth is, I’m not even sure it’s possible really, especially if you have a phone that requires constant attention. I must have a phone, right, after all, because I have children, this goes without saying, so OKAY…I’ve dipped into the blogosphere a few times since my announced absence. So, so…big deal!

Wouldn’t you agree it’s impossible to break free of the smartphone? Unless I chuck my phone off a cliff, I’m not sure I can actually go a day without it. I mean, they’re in our bedrooms, capturing the color of our bedspreads or some such. In my reintroduction to the world of work, (I temped for a temp), I observed that people walk around the office with the smartphone in their palm, eyes cast downward, gait unsteady, traipsing around, doing something “job” related, undoubtedly. It’s only a matter of time before the smartphone is implanted inside our brains or our eyeballs. We’ll say, this IS easier, and no more neck cramping.

Considering the scope of the almighty smartphone, I feel strongly that although I have slipped momentarily, I was most successful in taking a break. Just look. Here’s proof.

I feel lighter: Digitally, I’ve shed baggage. I deleted 23,000 messages from my email accounts and I felt light and happy enough to do cartwheels. This is how happy it made me. And at .00042 calorie/mouse click, that’s 9.66 calories I burned while completing this fulfilling, albeit repetitive, task. Who knew? But realistically, it’s probably more than 23,000 clicks, so let’s just say I burned an even 20 calories. And this without even trying. A bonus!

The flip side is that in the absence of my overloaded email accounts, ads have devoured my computer. I’ve debugged, defracked, blocked, disabled. There is no end to this, and I must now call on the professionals.

I am a hero: Undoubtedly, I’ve extended the life of our pet hamster, Little Claws. See re-enactment below: 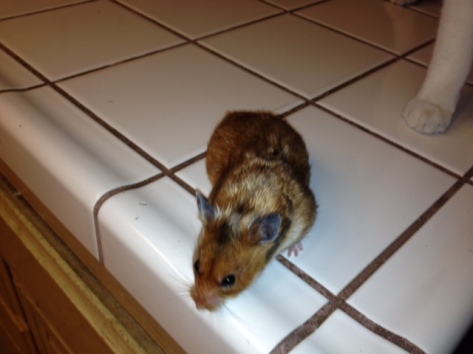 Oh, it was dreadful! Little Claws was just one claw away from nearly jumping off the kitchen counter while the cat callously rooted him on. Little Claws, with his cheeks stuffed with food (not shown), must have considered it would be his last meal. Perhaps, he could get one last swallow in before plummeting to what most certainly would have been his death. If I had been blogging, I know he would be gone, GONE! I know this, because I was there to catch him. Don’t worry. Little Claws is safe, unharmed, and back in his wood chips.

My spirit is renewed: I had two dressers broken and my bed frame cracked. And then, unexpectedly, a good friend of mine who was moving (sob, I am sad), gifted me her bedroom set. Times like these, I feel someone is looking over me.

The flip side is that I needed to organize, and fast. I had to sift through piles and piles of miscellaneous crap, toss or reorganize into smaller piles, to be organized yet again. Check out the disposable Kodak.

These photos require frames. Clearly, this is evidence of a mom gone berserk (who me?), who must feel that every moment is special and must be captured for all of eternity. There’s not enough wall/horizontal space for all of these, and most don’t want a photo from six years ago. This is complicated by school photos now being a bi-annual event, which I must purchase just because. You’d like the most recent, you say…let me locate that for you….

I touched the stars: I saved the best for last. I’m not talking about a rocket ship, but the next closet thing: a roller coaster. Actually, that would be several, like six of seven of them. I lost count.

I’m ON this thing. The Hammerhead. Pure lunacy. I’m NOT going on this again.

Just look at those legs dangle.

The Boomerang (below) went not only forwards, but backwards, too. I thought I might fall out of my seat in the slow, steady climb facing forward. I had never done that before.

I rode all these coasters with my ten-year-old son. Waiting in line, he told me he wasn’t afraid, although I detected a hint of fear. I nudged him a little closer and held his sweaty palm tight in mine, trying to be brave for him, secretly trembling in my boots. What he didn’t know was that he gave me courage, each and every time. We bonded.

71 thoughts on “It’s not the same without you”