There, I made up a new phrase. Twitteresque. I have no idea what it means. I just like the way it sounds, and if I like it, you might like it too. I’m adopting the “Effortless” approach. You may recall I used the Social Effort Scale last week, which determined that I “try too hard” on Twitter…even though most of my activity was said to be in the “Effortless” category.

According to the feedback on individual tweets, replying with a simple, “Thanks, that’s cool!” gets a “Not Trying Hard Enough” score. However, if you add a hashtag, you may find yourself in the “Effortless” category after all. Fair enough, but doesn’t that require more effort? Just an observation.

But I got to thinking about what “Effortless” look like on Twitter, and by that I mean what does it look like on the screen? I’ve come to this conclusion. Those who do effortless best look like they don’t give a shit. The guy that rolls out of bed, half-dressed, half-asleep and says something clever like, “I don’t want to get up today….” That gets retweeted 1,027 times. I think you know what I mean.

Of course, nobody does “Effortless” better than celebrities. They probably don’t want to be on Twitter in the first place. Let’s take a look see.

Here are a few famous writers. Now, I know Stephen King finally resigned and opened a Twitter account, but I think he’s enjoying himself.

No big introductions here. Just Stephen King in a cool skeleton-with-a-guitar shirt. It’s all you need. Maybe the comfortable, scary approach would work for me. This is rock star cool.

More deep cool, and cool enough to drink milk. My husband had a glass of red wine with him once. True story. Where was I? How come I didn’t get to have a glass of wine with him. Now I’m getting upset.

Check out those stats. My husband says Leo follows him and even retweeted him once. Oh, sure. I’m a bit skeptical now that I see the smallish number of people that he follows, also typical of celebrities. Grumpy Cat, or some version of him, followed me. I do have that! Anyway, cheers to Leo’s 11.8M followers.

Perhaps, I should be drinking something in my profile picture. Just a thought.

And here’s someone who needs no introduction at all and only one name.

Just the one name identifier and the dogs. Lots of fluffy dogs.

Here’s her friend Ellen with a catchy intro:

Her tweets…she’s referring to the episode in Seinfeld, of course, when Elaine is in the spa, telling a woman that her boobs are real and that “…they’re spectacular.” Boobs, there. I got that in. Boobs! WordPress suggested I should write more about boobs this year in my posts. That worked out well for

me, and…that was effortless. Look at that.

So, Ellen got the flu from her friend Oprah. I’m sure you’ve all heard about it by now. It was big news on Twitter and Ellen was proud to get the flu from her. Favorited more than two thousand times. Let’s celebrate the flu, and why shouldn’t we?

Here’s another one of Oprah’s friend. Mr. Neil Patrick Harris. Incredible in Gone Girl. Did you see him? I thought he was excellent. He deserves some kind of prize. 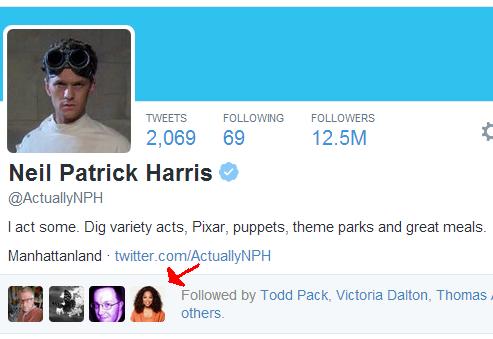 Act some…you mean since you were four or something? Variety acts…you mean like the Academy Awards? See, effortless. And I will add, humble. And Oprah is here, and not even listed in the “Followed by” list. She’s just hanging out there. It just struck me as funny is all. Not funny?

This has been an edition of “Let’s Talk Twitteresque.” Your takeaway is simply this: If you want to appear effortless on Twitter, just be famous. Got it?

What about you? Ever had a glass of wine with a celebrity? Are you drinking a beverage in your profile pic? Have you ever had any interaction with a celebrity on Twitter? Please share.