If you’d like to read the previous part of this scene, you can find it here. Thanks for reading. 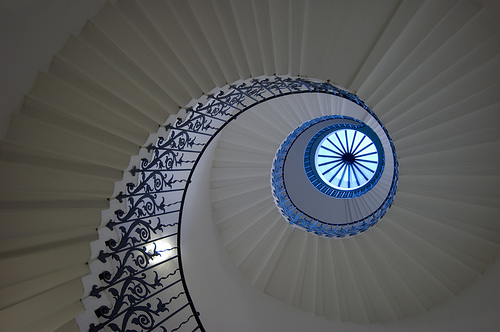 Two more steps and my body would have been a heap on the concrete floor.

I inched across the platform, releasing the door from my sweaty fingers, and it slammed shut behind me. When I tried to open it this time, it was locked.

I stepped into the hallway, but instead of a long corridor before me, I gazed at a shortened version, faced with yet another greyish-blue door directly across from me, just like the one I passed through moments before. Had my eyes played tricks on me or had it been there all along?

I had no choice but to but to exit one door and enter the next. The knob turned easily, and as if to say I’d chosen wrongly before, and the door opened to an elegant stairway, the walls and steps a pristine, white marble, with candlesticks mounted on the walls, lighting a path, that wound itself around and around endlessly. I hadn’t been aware that the museum had more than three stories, and in fact, knew I had climbed up just one flight to see the exhibit, remembering it now with the pain in my big toe throbbing the whole way; yet, here there must be at least three, maybe five floors of stairway.

I gained momentum with each step, winding down and around, not even knowing if I was still in the same building. I recalled a mental picture of the outside of the museum, trying to remember if there was an attachment of some kind and could remember none.

“Is anyone here? Anyone? Hello?” My voice echoed.

As I walked the spiral, I felt like I was drifting, almost carried, and moving faster than I wanted to, and faster than my aching foot would allow me. Don’t give into it, hold it together. Almost there, almost there. Almost where? I found I couldn’t even so much as pause, and gusts of warmth inflated my body like I had been caught in an air pocket, taking one step and falling the next two. Cascading downward, the staircase narrowed, and I needed more air.

Faster, less air, warmth, then heat, spinning around the railing, I felt like I might lose my step and fall, so I grabbed the thick, marble railing and held it as it slid underneath my fingers, friction burning my flesh. The spiral didn’t stop for any floor, and I lost track of how many I’d passed, my disorientation emerging as the ground slipped from beneath me. I reached the bottom with a crash, landing on my side; my cheek hit the cool, smooth wood of the floor.

Faint classical music played in the background. It was a piano, something I’d heard many times. Even if I ended up in the wrong place, I wasn’t alone. A murmuring of voices flowed from a room nearby and the floors creaked with footsteps. I rose, drifting towards their voices and then I saw them all; people milled about, laughing, enjoying themselves, viewing grand art on the walls, and sipping from champagne flutes. A jolt hit me in a deep pocket of my stomach because it was all too familiar. This was the exhibition, the same exact one.

I spun around in every direction, gauging the parameters of the room. Patrons bounced in and out of my path as I searched for the exit.

“Looking for something?” A security guard towered above me.

I said nothing and walked in the opposite direction, and who did I see but Jake, standing by himself. He stared at a painting, smothered in an expression of dumb calm, the way he looked when I ceremonially removed my shirt or my bra for his viewing pleasure.

“There you are,” I said, trying to appear as equally calm. He wasn’t flustered in the slightest. He was lost in this painting. The recessed light cast a glow around him, holding him captive; a smile crept across his face as if he could barely contain himself. He stood motionless, unable to turn his head to look at me.

“Isn’t she incredible?” he exclaimed, fixated on a portrait of a woman, dressed in a white, flowing gown. An iridescence emanated from the painting, casting a glow around her husband.

“I looked everywhere for you,” I said. My absence hadn’t occurred to him.

His eyes were wild pinpoints, and I felt he was almost incapable of moving. I waved my hand in front of his face.

“Hey,” I yelled at him, loud enough for the next room to hear me.

“Hmm?” he finally turned to look at me directly in the face and shrugged.

“Where the hell have you been?”

“Right here. I’ve been here the whole time,” he said. “Marveling at this painting. Claudia, it’s called. Claudia,” he whispered the last to himself. “Isn’t she a masterpiece?”

I blinked my eyes several times.  “A masterpiece? No, I don’t think so,” I said, but he didn’t hear me.

The lights flickered on and off signaling the museum’s closing. The security guard, the same one who crossed my path, poked his head in.

“We will be closing in ten minutes,” he said, nodding his head at Jake. The evening had slipped away.

Jake glanced once at the lady in white and then grabbed my hand. Looking back over my shoulder, I swear she blinked her eyes. I knew she could see me. She stole my evening.

16 thoughts on “In Search of Masterpieces (part 2)”