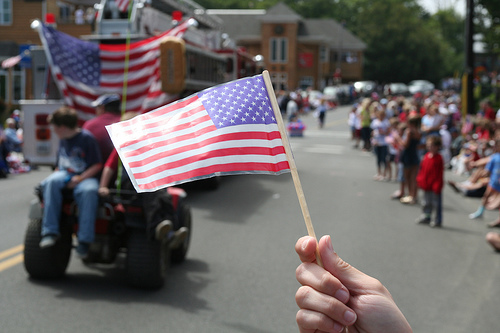 With temperatures in the triple digits, I will leave town with the masses in search of a cool breeze. But, we’ll be back so my son can participate in a festive holiday parade with his water polo team. I don’t know the specifics of his participation; if he’ll be walking or riding, chanting or hand waving. Since it will involve traveling on black asphalt, I know one thing. It will be hot.

I was in a Fourth of July parade once. I’ll never forget it. I was on the neighborhood drill team and, somehow, we ended up in the Fourth of July parade. Or, perhaps, we formed for the sole purpose of participating in the parade? I may have had something to do with getting the group together, although I would never claim that responsibility while we attempted to function as an organization.

I just remember the mad flurry to be in the parade and how excited I was. We managed to pull together a uniform: navy shorts, a white T-shirt (because we all had that one!) white gloves, and tennis shoes. We practiced our 8 counts of 8, and chanted the drill team cry: 1-2-3-4-5-6-7-8! With our voices rising with the 7-8, to start again. Over and over. And over. It was endless. Our jagged movements were in unison: a movement for every count, all angular, arms above, arms below, switching back and forth, one arm high, the other side, etc; we may have even included a side head. The next counts of eight were strikingly similar, but we rehearsed it all like mad so we knew it backwards and forwards.

Our parade route was 5 miles. You heard that right. A mega 5-mile hike! We must have been 8 or 9 years old, so the journey was a long one. Hey, it would still be a long one, even today. I remember going under bridges, up hills, through tunnels all behind a blaring marching band, who most people thought we were associated with. They stole our thunder, you see. But by mile 3 or 4, we were so delirious we just wanted to stop our 1-2-3-4-5-6-7-8-ing.

Monster blisters had formed on the back on my heels. I don’t know if our blue and white color scheme was chosen expressly for the Fourth of July parade or not, but by the end, we also had beet-red faces to complete the Fourth of July ensemble. We were red-faced, white and blue. I would also add brown because there was so much brown everywhere. All the many horses were brown, who left their shit, like little presents, all over the route. We attempted to tip-toe and chasse in a spontaneous re-choreographing of our routine all around the brown horseshit, as if we could fool anyone. Why would you bother with such a thing when you very nearly wanted to faint?

At some point, we arrived at the central parade area where we were to dazzle everyone with our performance, all red-faced and patriotic. We may have left out our chant altogether, gone half deaf from the blare of trumpets before us.

I just wanted it all to stop.

And, then it did. It went on entirely too long, but then it ended suddenly. Kaput, like in one big heap and we no longer had anywhere else to march. I was so so happy, so thrilled we did it. Who knew such misery could result in such joy and achievement. I’m certain I waved a flag at the end.

I’d show you a photo to prove I was there, but this was before we photographed every second of our lives. You’ll just have to take my word for it. I was in the Fourth of July parade, red (faced), white and blue.

Perhaps this photo of our local cattle run can serve as a stand-in. This is from the previous year, however. It was cancelled this year due to extreme heat and a high of 108. Yikes!

I hope everyone who is celebrating has a Happy Fourth of July! Stay cool!

Have you ever been in a parade? If not, do you want to?

33 thoughts on “That Time I was in a Parade”