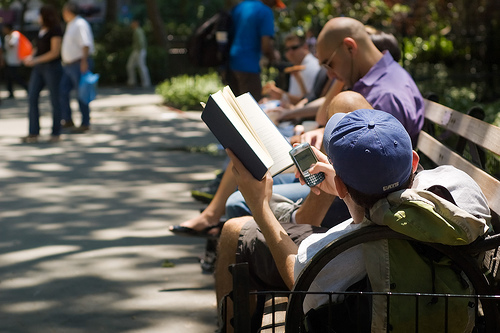 Multitasking is a catch-all word that signifies success, adaptability and, above all, is a common descriptor on hopeful job applicants’ resumes. Friends, do you want the truth?

Our brains don’t like to multitask. In fact, they hate it and reject it. They’re simply not wired to behave in such a manner.

Research shows that humans can only think about four things at once. And if you think you are multitasking oh so successfully, chances are you’re just not. You just spilled your coffee while you looked at that guy crossing the hall, checked an email, mistyping a word and meanwhile, while trying to hold a conversation on the phone, you didn’t hear the last two sentences. You look busy and productive, sure. How is this really going?

It’s impossible to multitask. Your brain will accommodate multiple requests by doing what’s called “spotlights.”  At most, the brain may dual-task, and divides and conquers to complete those two tasks. But two complex tasks are the limit. If you add a third task, the prefrontal cortex will simply discard one of the tasks. It’s no dummy. The results show that the brain has only two hemispheres available for task management and can only take two tasks at a time. Simply put, it needs both hemispheres to successfully complete a task.

As further evidence, I kid you not, while writing this post I attempted to cook dinner and burned it. Oh, what a bumble! Personally, I know that I am drained when I take on too many tasks and it usually takes me longer to complete any one task. There’s research on that, too.

Multitasking is regarded as a badge of honor by today’s youth and likely encouraged as the new “norm” by their peers. A study out of Stanford identified two separate groups, “heavy media multitaskers” (HMMs) and “light media multitaskers” (LMMs). Both groups were asked to decipher relevant information from the environment and irrelevant information based on memory, all the while switching their tasks. You guessed it, the heavy group did worse. What’s more, those who multitask actually think they’re great at it!

While attempting to do a task, I’m convinced the mind can think about a whole host of things completely unrelated to the task at hand. My yoga teacher suggests that you can think about 13 things at once and I believe her, but often it feels like much more than that. Do you have moments when you feel your brain might explode with too many thoughts flying around?

Here’s a test. Next time you feel overtaxed with too many thoughts, write them down in a list. No need to make them perfect, just them out of your head and on paper.

Actually writing them down will slow your thinking, but what’s more, you’ll see you may not really be thinking of as many things as you feel. It’s more likely that anxiety is playing a role. It likes to get in the way. Anxiety is very bossy and is also responsible for shallow breathing and irrational thinking.

So, okay the simple solution must be to think and do one thing at a time, right? It turns out, people may have more trouble with that one. I have some ideas about this. Tune in next week, when I talk about my new passion. Breathing on purpose.

In the meantime, if things seem a little harried, stop and check in. Give yourself grace. You’re just human, after all.

55 thoughts on “The Myth of Multitasking”