Over the holidays (yeah, I know I’m still back there…still recovering), I spent some time with that fluffy, white stuff that falls from the sky. Snow! Lovely snow. Lovely cold, icy, slippery snow. In all its many forms, a beautiful sight and a great way to bring in the New Year.

A few years back, I drove with my sister and our kids for hours around the mountain in search of untainted, pure white snow. Ha. I  think we actually would have settled for brown snow. The fact is, where there should have been white there was only brown, and it wasn’t snow. We checked. Dirt and such.

This year, luckily, we saw plenty of snow thanks to a couple of recent storms. We had a blast sledding down the mountain, dragging our circles of snow behind us.

Fast forward to our rockin’ New Year’s Eve bash. Here we are in the empty ice rink.

Apparently, the guests were coming back pretty soon, uh….later. Like never.

A few other guests did make it, a mother and her two daughters. We talked for a bit and she revealed to me how her step-daughter was in the ER due to a concussion she suffered while sledding. Apparently, her step-daughter wanted to be as bold as her brother and followed him down the hill. I knew the place. We had passed it earlier and had already promised the kids we would go the next day.

The place, Little Sweden. It’s a former ski resort, closed down years ago and now a popular destination for snow play, so long as you can get a parking spot. We kept our promise and went on New Year’s Day. Big mistake! The place was teeming with sledding daredevils and, unlike the safe cushion of the soft snow above, this hill was icy and hard, and the wind picked up.

Here’s some pics of my son going down the mountain to give you a sense of it: 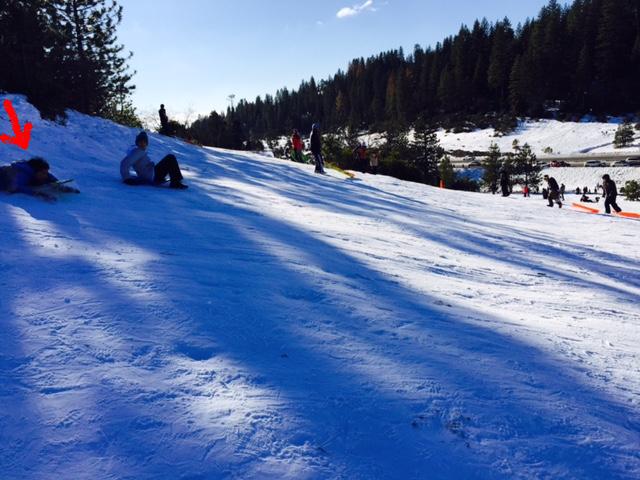 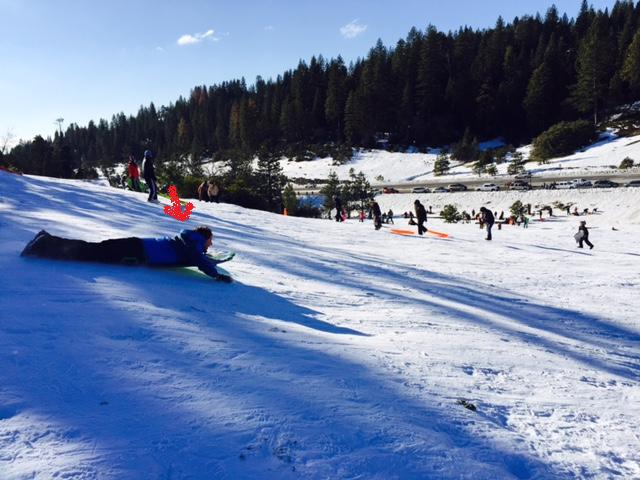 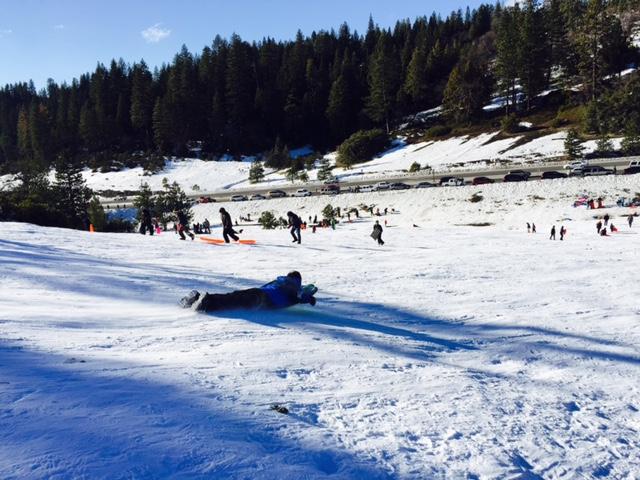 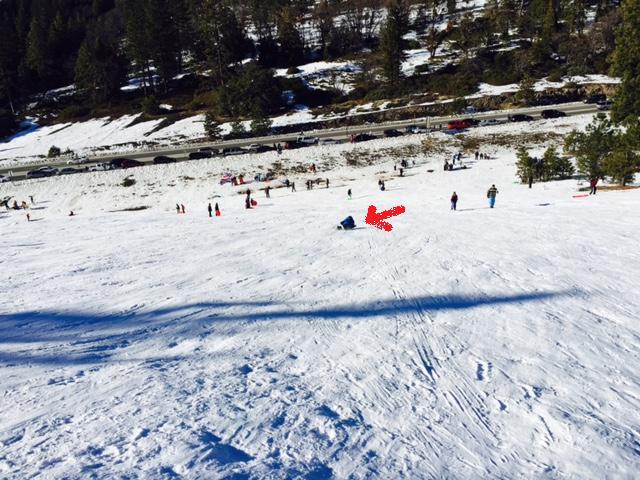 This hill is completely insane! How did I not notice? Do you see those little dots at the end of the hill? Those are people and those are cars that line the road. I hope you get a sense of the steepness. Add to this, the total chaos of bodies flying down in all different directions. Oh, it was madness.

Why I decided to DO this, I have no idea! My son and I went together on the sled, which is probably our first mistake. With so much weight, we had a lot of speed, hit a huge bump on the way down, went flying, actually got some air and BAM! I hit my head. Translated in haiku:

Smack, whack, the ice is
cold as my head rolled inside
stinging, swirling stars

The impact was pretty solid, like a cement block crashing into my skull. If someone caught it on video, I don’t think I could even watch it. I have no idea what happened. I do know I was scared to death. I didn’t pass out. I got up right away. My head hurt, and I was dizzy. My son was okay and asked me a series of questions, which I answered correctly.

Friends…I’m lucky to be alive.

I knew about the dangers of this hill and worried sick over my kids hitting their heads. Recall, only the night before I learned of a little girl laying in a hospital bed due to THIS hill! I saw plenty of accidents when I was there, too. What I forgot was that I was just as equally at risk as anyone else.

What’s completely amazing to me is after such a hard-hitting blow, I bounced back as if it never happened. I even drove 100 miles after on a windy road I had never driven before. “Kids, if I pass out, call 911. Okay?”

I bounced right back. That’s what we do. But I wanted to pause and reflect on it. I know I’m lucky and I’m so very grateful I’m here. It’s a rough start to the new year, but it also puts things in perspective for me. I don’t take anything for granted. Your life really can vanish in a blink of an eye. All the petty things just got squeezed out. It’s a reminder for me to linger a little longer in the moments that matter, making them as full as possible. I wish you a great new year, savoring the moments that count.